Puri Jati and Kalang Anyar (and the surrounding area) have grown in popularity as muck diving sites in the last few years and continue to impress photographers with their variety. 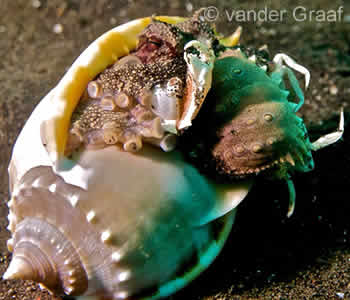 A 2.5 hours drive from south Bali through the mountains to the centre of Bali’s north coast, Puri Jati is located on the outskirts of the small village of Seririt – approximately 20 minutes west of Lovina – with ‘Kalang Anyar’ about five minutes further on.

You can expect water temperatures of 27-30°C. Visibility can reach 30m although lower is the norm due to waves and currents, both sites are quite unprotected, but the water is usually flat and calm. 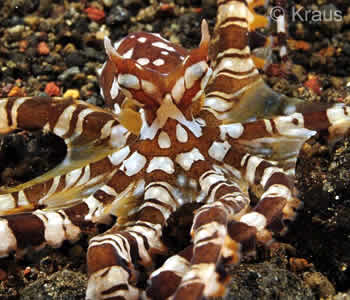 What can you see at Puri Jati & Kalang Anyar? 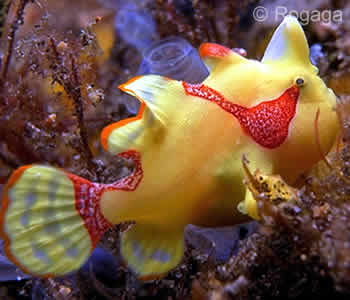 There is no reef here but, depending on the season (and fishermen), you will find sea grasses, sea pens, loads of tiny Mushroom corals, and algae-covered debris, all providing shelter for small, well-camouflaged critters.

With such a large area, you would never, assuming good water conditions, leave Puri Jati thinking “I’ve seen everything there is to see here”.

Puri Jati is a wide, very gentle, brown sand slope, for about 50m from the beach until you reach 10m where it becomes steeper. The right side has a river which should be avoided if it’s been raining.

Kalang Anyar is similar to Puri Jati: A gentle, dark sand slope with a variety of sea pens and sea grasses. Although here we also see creatures such as Painted frogfish, Mimic octopus and other sought-after cephalopods, Pegasus seamoths and eels.

There are noticeable differences in some of the species, quite often the nudis here are totally different from those seen on the same day at Puri Jati.

Unfortunately, the fishermen continue to drag their nets over areas of Puri Jati. AquaMarine hopes that as the local  community sees the financial benefit of visiting scuba divers an agreement will be made to stop fishing here.

Include Puri Jati in