Crystal Bay is a popular area to spot Mola-Mola in season, usually from July to mid-November. It is also a great reef dive (at other times of the year). 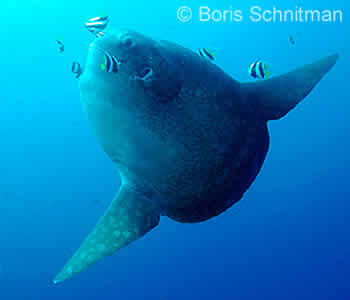 Crystal Bay aka Penida Bay is the best known dive site in Bali for seeing Mola-Mola (Ocean sunfish) during the July to mid-November season.

This doesn’t mean it’s the only place to see them – which is good because, in high season, there can be quite a number of boats/divers here with everyone hoping for a glimpse of the elusive Mola-Mola.

In MM season, AMD-B pick-up times are one (1) hour earlier than usual to try to ensure calmer conditions and fewer other divers in the water.

Before departing on a MM Trip with AMD-B, to ensure safe diving practices, you will be required to read and sign our Mola-Mola Diving Guidelines. Also, to promote awareness and non-harassment of MM, you will follow the Mola-Mola Code of Conduct.

What you can see at Crystal Bay

Whether for Mola-Mola diving or not, although it can be a little surgy, entry and exit is always done within the shelter of Crystal Bay itself.

You’ll see a large rock isolated on the edge of the bay, marking the edge of the channel. The hard coral reef starts at 5m, has a white sand base, and is covered with anemones and soft corals. Marinelife includes angelfish, sweetlips, frogfish, Banded sea snakes and many Moorish idols. You can also expect to see occasional Wobbegong sharks and Manta rays. Below 27m we often find Decorated dartfish.

As we believe the Mola-Mola only ascend to recreational depths to be cleaned, we also keep our fingers crossed for a lot of bannerfish here too!

Following the north side of the bay around, we come to a Bat Cave: Enter from underwater, surface inside the cave (which is open to the sky) where bats sleep overhead – big waves may crash in through the top. Sometimes small reef sharks are in the cave, but they generally leave when divers arrive.

Continuing along the (very deep) wall from the Bat Cave at 20-24m, the hard corals provide homes for a number of lobsters.

Because this area is in Ceningan Channel, when there is a current present, and due to the coldness of the water from the Indian Ocean, there is also definitely the opportunity to see reef sharks, Eagle rays and also (if you’re lucky) Leopard, Wobbegong and Guitar sharks.

Include Crystal Bay in