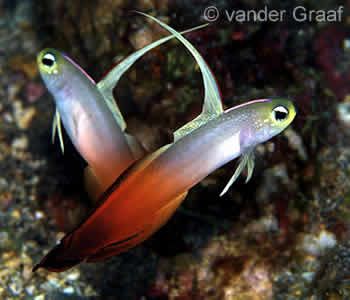 Just slightly further round the volcanic spur than Palung-Palung, Batu Kelebit is about 15mins from Tulamben Bay by jukung (local outrigger fishing boat).

Between the ridges are channels of grey and white sand that run 25-40m in depth. Here we often see schools of Big-eyed trevallys, while on the sand are Fire dartfish, Gold-specs jawfish, Starry puffers and cuttlefish.

In fact, it is not only the colour of the sand that differs from Tulamben Bay. The species of even the most common reef fish are different too.

The steepness of the site combined with the structure of the ridges, and plankton-rich water, means you have more chance to see pelagics here than within Tulamben Bay itself. These include barracuda, tuna, Manta rays, White-tip reef sharks, turtles, Dogtooth tuna and sometimes Mola-Mola (Ocean sunfish).

The water is cooler here (26°C is not unusual) due to a cold upwelling from the depths. Visibility can be as low as 15-20m due to plankton but is usually better.

Although the channels are well-protected, as the (north west) current varies from mild to quite strong with occasional deceptive down currents, you need to watch your depth and stay near your guide.